It is unacceptable for states to stand on the side-lines as a UN Security Council listed terrorist organization overruns Afghanistan and commits acts that may amount to war crimes and crimes against humanity, UN human rights experts said on Monday. 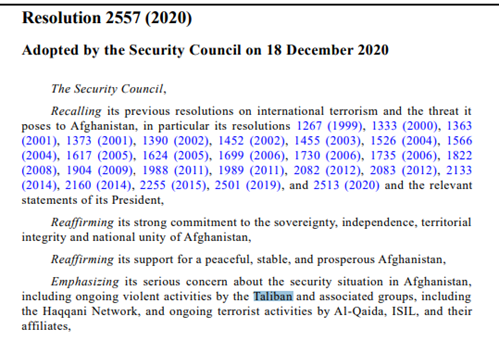 The experts said international law requires that those engaged in terrorism be dealt with fully using laws developed “since the Taliban was first designated as a terrorist organization by the UN Security Council.”

They said the Security Council must “be unequivocal in action,” calling on the body “to apply to the fullest extent and consistent with international law, the international sanctions on designated terrorist organizations.”

The UN officials stressed that the Taliban’s recent military offensive “appeared to have taken over much of Afghanistan by force and has directly targeted civilian city centres.”

“The most basic of commitments made in the current agreement, namely, a commitment to engage in an intra-Afghan dialogue, rather than pursue a military offensive, is being broken with impunity,” read the statement.

They also pointed out the “particular responsibilities of states who have led and engaged in a peace process with the Taliban.”

The statement came shortly after UN chief Antonio Guterres appealed to the international community to stand united to ensure that Afghanistan does not go back to being a terrorist haven where human rights are trampled.

The experts urged UN members to take “immediate and preventive action to prevent the slaughter of civilians.”

They said the action is critical to avert “the destruction of essential civilian infrastructure, and the undoing of decades of human rights, the rule of law and gender equality work to advance the health, education, culture and social infrastructure of Afghanistan.”

“The work undertaken in partnership over the last 20 years by the Islamic Republic of Afghanistan and the international community with Afghan human rights defenders, women’s groups, other civil society organizations, and the Afghan people is under grave threat,” the experts warned.

The UN experts cited a recent statement from the High Commissioner for Human Rights that said the Taliban have carried out “a relentless campaign of direct targeting of civilians, civil society and journalists, summary executions, the assassination of human rights defenders, mass executions of civilians, and unlawful restrictions on the human rights of women and girls.”

“We are outraged by the wanton attacks on civilians, the targeting of independent journalists and media, and the violence being directed at women and girls including the imposition of strictures on their capacity to function in any independent way in society, which is entirely inconsistent with the dignity and rights of women and girls,” the experts said.

The UN experts said they had reports from 16 provinces that most women are “experiencing the same rights violations as 20 years ago” under the control of the Taliban.

Some 80% of nearly a quarter of a million Afghans forced to flee since the end of May are women and children, according to UN officials.