UK enforcement round up and looking ahead to 2020

2018 was a relatively quiet year for public Financial Conduct Authority (FCA) enforcement outcomes, at least in terms of the total fines imposed. After the post-financial crisis outcomes driven in large part by benchmark manipulation, total fines in 2018 were around £60 million. 2019 has seen a return to some bigger numbers (more than £390 million), albeit with a similar number of fines as in 2018.

The big numbers in 2019 were affected heavily by significant fines imposed for historic anti-money laundering (AML) failings, transaction reporting issues, reporting suspicions of fraud, and mis-selling as the FCA has tackled a number of legacy cases. And for the first time, fines against individuals made up a significant part of the overall total, with big penalties imposed on executives of Keydata.

As well as looking at the published outcomes, it is also useful to look at the statistics that the FCA publishes about its underlying enforcement activity. Consistent with the FCA's approach of using enforcement investigations as a diagnostic tool, there has continued to be an increase in the number of investigations being opened, which is reflected in the statistics. The top-five areas by number of investigations reflect FCA priorities, including retail conduct, insider dealing, financial crime and culture/governance.

Some of the main statistics, and some observations on the different categories of enforcement outcomes seen in the past year, are set out below. 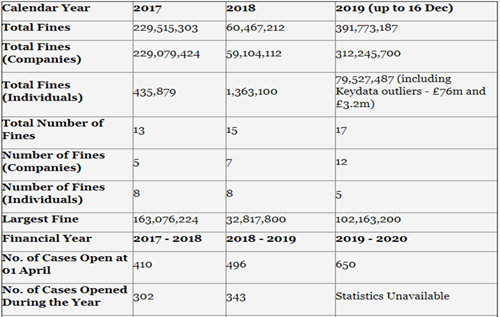 The most notable financial crime enforcement outcome this year involved a penalty of £102 million against Standard Chartered Bank for breach of the Money Laundering Regulations 2007 (Standard Chartered, April 2019 https://www.fca.org.uk/news/press-releases/fca-fines-standard-chartered-bank-102-2-million-poor-aml-controls). This is the second-largest UK penalty for AML breaches.

The FCA found significant shortcomings in the bank’s own internal assessments of the adequacy of its AML controls, its approach toward identifying and mitigating material money laundering risks and its escalation of those risks, particularly in high-risk areas of its business operations in wholesale correspondent banking and in its UAE branch. This decision emphasises the need for firms with international operations to implement an effective worldwide compliance programme, bearing in mind that the UK and other jurisdictions expect financial institutions to have the same high compliance standards as in the home state, and that firms must assess their own money laundering risks adequately to ensure higher due diligence for higher-risk business.

The international nature of money laundering means that financial institutions need to ensure their AML defences are strong wherever they operate, so that criminals are unable to exploit weaknesses in the systems even if they are strong in the UK. In this investigation, the FCA worked with various U.S. authorities and the central bank of the UAE, reflecting the continuing international cooperation in this area. The bank accepted the FCA findings but challenged the penalty in a partly contested hearing. This new option being used more frequently.

Both of these individuals were professionals – a senior compliance officer employed by UBS obtained and disclosed inside information about corporate transactions to a day trader friend, who profited from trades in advance of public announcements.

On the civil front, the FCA fined a fund manager £32,000 for failing to comply with proper standards of market conduct by attempting to collude with competitors during book builds for an initial public offering and a placing (Paul Stephaney, February 2019).

There is a clear overlap between what is considered as market misconduct in this regulatory enforcement action and competition law breaches. And, in fact, the FCA brought its first competition enforcement action against Paul Stephaney’s employer and two other asset managers in relation to the same facts (Newton Investments & others, https://www.fca.org.uk/news/press-releases/fca-issues-its-first-decision-under-competition-law February 2019).

The FCA continues to emphasise the importance of adequate systems and controls to prevent market abuse and to supply the FCA with the data it needs to monitor the markets.

The broker challenged the penalty, but the Upper Tribunal upheld the FCA's decision. The FCA also fined an inter-dealer broker £15.4 million for inadequate controls in its rates division to prevent manipulative and wash trades (Tullett Prebon October 2019 https://www.fca.org.uk/news/press-releases/fca-fines-tullett-prebon-154-million).

Importantly, the FCA stated that the wash trades were not misleading or market abuse, but nevertheless improper. These trades were sheltered from compliance and senior management scrutiny, and obvious red flags relating to excessive brokerage were not investigated. Senior management believed that controls were adequate, but the FCA found otherwise.

The FCA also took action against

Finally, the focus on the adequacy of issuer disclosures has continued. Cathay International Holdings Ltd, its chief executive officer and finance director were fined a total of £665,500 in connection with breaches of the Listing Principles and the Disclosure Rules and Transparency Rules.

The decision focused on the adequacy of Cathay's systems and controls in monitoring expected performance against market expectations which resulted in a delay in releasing an update on its actual and expected performance for the year ended December 31, 2015. The FCA also took issue with certain information provided to it by Cathay when it raised questions about the timing of the announcement.

As in 2018/19, the FCA's Business Plan for 2019/20 lists operational resilience as one of its cross-sector priorities. In this regard, the Bank of England, the Prudential Regulation Authority (PRA) and the FCA do not expect a zero-failure rate because incidents will always occur, but it is important that any incident is well-managed. This means that the regulators are interested in a firm's measures to prevent an incident, its ability to respond swiftly to an incident, responses to emerging risks, and the way it manages outsourced service providers.

On this last point, the PRA and the FCA jointly fined R Raphael & Sons £1.9 million in relation to a technical outage at a third-party payment service provider (R Raphael & Sons, May 2019https://www.fca.org.uk/news/press-releases/fca-and-pra-jointly-fine-raphaels-bank-1-89-million-outsourcing-failings ).

The regulators found a lack of oversight and that there were inadequate processes for outsourcing critical services, which the regulators link to operational resilience risk.

Although we are coming to the tail end of complaints relating to payment protection insurance there have been a number of mis-selling cases this year. For example, FCA findings relate to the standard of sales staff training to assess whether insurance cover is suitable (Carphone Warehouse, March 2019 https://www.fca.org.uk/fca-fines-the-carphone-warehouse-over-29-million-for-insurance-misselling), sales call monitoring and financial incentives to staff for sales (Standard Life Assurance, July 2019 https://www.fca.org.uk/news/press-releases/fca-fines-standard-life-assurance-limited-30-million), and issues around advising customers that they could get a better deal by shopping around (Prudential Assurance, September 2019 https://www.fca.org.uk/news/press-releases/fca-fines-prudential-failures-relating-non-advised-annuities-sales ).

The FCA has also fined a fund manager for failing to inform retail investors in two funds of a change from active management to more passive management (Henderson Investments, November 2019 https://www.fca.org.uk/news/press-releases/fca-fines-henderson-19m-fund-failings).

Institutional investors were informed of the change and offered free management, but retail investors continued to pay the existing charges. The FCA therefore criticised both the failure to have appropriate systems in place to communicate the changes to all investors, and the differential treatment of institutional and retail investors. Given the FCA's interest in charges for long-term investments, it is likely to identify other funds that it regards as "closet" tracker funds.

Treating customers fairly remains a priority for the FCA, with a particular focus on protecting vulnerable customers. The FCA has just introduced a temporary ban on retail marketing of mini-bonds; other potential targets for future enforcement are advice on pension withdrawals, any products that give a better deal to new customers than to existing customers (this often includes vulnerable groups) and "green" financial products.

The FCA continues to promote a healthy corporate culture at financial services firms. Part of this involves setting the right tone from the board, providing incentives for good conduct and a culture that promotes openness and speaking up about misconduct.

Aspects of the FCA's work in this area emerged in enforcement actions this year with reference to senior management communications and escalation of issues for regulatory reporting.

The FCA published a censure of Andrew Tinney for recklessly giving the impression that a cultural report concerning Barclays Wealth's U.S. branch did not exist (Andrew Tinney, August 2019).

The FCA also fined Bank of Scotland £45.5 million for failing to report suspicions of fraud identified in its Reading branch until Summer 2009 (Bank of Scotland, June 2019).

The failure to report the fraud promptly to the FCA and criminal authorities delayed criminal prosecutions and highlighted the need for a culture of reporting in unregulated business activities, such as commercial lending, in line with regulated activities. One of the breaches in the action against Tullet Prebon related to openness in dealings with regulators – the broker was criticised for failing to provide frank and open responses to the FCA’s requests for evidence.

The themes explored above are, for the most part, quite familiar ones, and based on the cases FCA Enforcement has on its books at the moment there is likely to be activity in these areas in 2020. Enforcement has opened a significant number of investigations in recent years, and it will be interesting to see whether there is an increase in the number of public outcomes next year, bearing in mind the historic nature of some of the outcomes in 2019.

What we can be sure of is that the level of enforcement activity is unlikely to reduce any time soon.