Home News The Biggest Company in the world you have never heard about……..[it may be a lie!!!]
News

The Biggest Company in the world you have never heard about……..[it may be a lie!!!]

The UK companies house has another example of its inadequacies with the following breath-taking example. 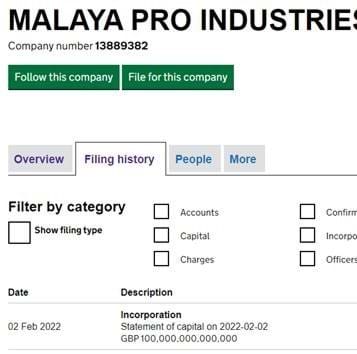 Whatever weapons we have against Russian dirty money, Companies House ain't one of them.

Businesses are incorporated in the UK with blatantly false details, like the one claiming to have more share capital that the entire world's economic worth.

Earlier this month we had Business Secretary Kwasi Kwarteng downplaying fraud as not a “crime that people experience in their day-to-day lives”, despite the fact that you’re more likely to be a victim of fraud than any other crime.

Now Transport Secretary Grant Shapps has declared on ITV's Peston show that Companies House and “our auditing system” has “some of the highest standards in the world”, capable of spotting Russian dirty money being laundered in the UK.

“does not verify the accuracy of the information filed”.

One breath-taking example is a company incorporated earlier this month called Malaya Pro Industries Limited, supposedly with share capital of £100,000,000,000,000, which is more than the annual economic output of the whole world. https://find-and-update.company-information.service.gov.uk/company/13889382/filing-history

If that’s laughable, other examples are potentially more serious.

Last year I wrote about a string of linked investment scam companies including Texmoore Limited, which had filed blatantly false accounts, the figures for 2020 simply being cut and pasted from 2019.

When I asked Companies House about this I was told:

It provides a registered address at a London mail-forwarding service – the same one used by Malaya Pro Industries – and the sole director is an Indian national living in the United Arab Emirates.

Despite the use of the prestigious name, the real Goldman Sachs informed me this company has nothing to do with them.

It’s a similar story with Citi Wealth Management Limited, incorporated on February 1, and which sounds like it might be the wealth management service offered by respected Citi Bank. It’s not.

Perhaps it is just coincidence that these companies are using names remarkably similar to those of well-known banking brands, but with fraud accounting for around 40% of all crime you can't help wondering if something more sinister is afoot.

According to banking body UK Finance, victims lost almost £129million in the first half of 2021 to impersonation scams in which crooks used the names of trusted bodies including banks, a situation not helped by the fact that gaping lack of checks carried out by Companies House.

A starting place for reform would be adopting the recent recommendation contained in the Treasury Committee's report on economic crime that the fee for incorporating a company be increased from £12 to £100.

It stated: "A fee of £100 for company formation would not deter genuine entrepreneurs, and would raise significant additional funding for Companies House and for the fight against economic crime."

UNITED KINGDOM YOUTUBE-IMAGE
« Back to News