The war in Ukraine has thrown an unprecedented spotlight on Russian oligarchs, triggered waves of sanctions and made them an urgent priority for investigative journalists.

Lighthouse Reports is meeting the challenge by working intensively with partners Correctiv, RUPep and Open Sanctions to enrich raw Russian sanctions data in ways that can serve the journalistic community and public interest.

Beyond the headlines there are complex questions to answer:

Who is an oligarch? How many are there? Who else has been sanctioned?

Making sense of these questions requires adding meaning and context to the raw data. Lighthouse has defined and categorised more than 500 Russians and Belarusians added to international sanctions lists since January 1.

Working with partners lighthouse have developed a methodology for labelling someone an oligarch, or a senior political figure, or another category.

Sanctions tracker hosted by Correctiv acts as a portal for journalists and researchers to quickly find answers to some of the key questions arising from this fast-moving, complex and vitally important story. 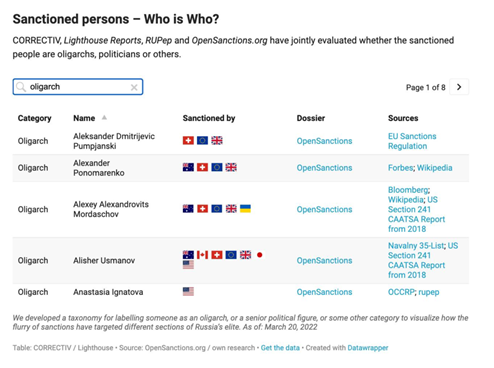 As Vladimir Putin’s troops poured over the border into Ukraine late last month, Western and allied governments responded by sanctioning scores of Russian oligarchs, politicians and other influential figures. The EU, Swiss, UK, US and others were sanctioning them in batches of up to several hundred a day. To the outsider, not only were the vast majority of the Russian targets completely unfamiliar, but the speed and scale of the sanctions announcements added to the sense of confusion and bewilderment.

Who are these people? Which government had sanctioned whom, when, and why? Why had some states sanctioned somebody, but others had not? And what did being sanctioned actually mean in practice?

Open Sanctions, an international database which has been compiling data from all global sanctions lists since late last year.

Correctiv, a German investigative journalism non-profit, who had carved out the Russia-specific sanctions from Open Sanctions data and built a live dashboard tracker to make sense of the big picture.