Home News EMMA feels let down. Let down by an island she loves.
News

EMMA feels let down. Let down by an island she loves.

In 2004 her husband John, then aged just 51, died from a sudden heart attack. Her twins were only five years old and had just started school. 'It was just so cruel; they were still only babies at heart.' She sold her home and moved closer to her family so they could offer support. The following years were tough.

Money was tight, as Emma's earning power was limited with twins to raise. She placed her savings with a local investment management company. T know nothing about investments, so I gave them discretion, comforted by the fact that they were regulated by the Jersey Financial Services Commission (JFSC).'

The performance of some of the investments was disastrous, losing all their value, so she asked friends to have a look at the investments. Without exception they were utterly appalled with what they discovered.

I was a young widow who was extremely reliant on this capital and they lost my money through Investments in a Brazilian shopping centre and a Chinese private equity company.' In each case her investment manager took substantial hidden commissions, which appeared to be the sole attraction of the investments.

With the support of friends she complained to the JFSC in 2017 and has been in regular correspondence with them since.

Emma also made a comprehensive complaint to the Jersey ombudsman, who was specifically employed to deal with matters such as this. Like many other investors, she is still waiting for a ruling.

Late last year the affected investors received a communication to attend a meeting at the JFSC. Unfortunately Emma could not attend, as she had to work. The feedback she got from the meeting was that she and all the other investors, could, in laymen's terms, be described as 'go home, have a good cry, and put it behind them'.

Emma went back and spoke to her friends who had advised her. They pointed out that while the JFSC was responsible for the regulation of the finance industry, they were also responsible for upholding Jersey's reputation - a difficult tightrope to walk. Her case would create bad publicity - given its size and the number of investors affected.

Emma is hopeful that the ombudsman will come to a decision before she dies of old age. The money she lost was not enormous in many people's eyes but is enormous to her.

Seemingly deserted by those paid to protect her she fights on. 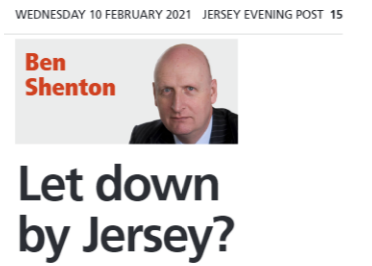 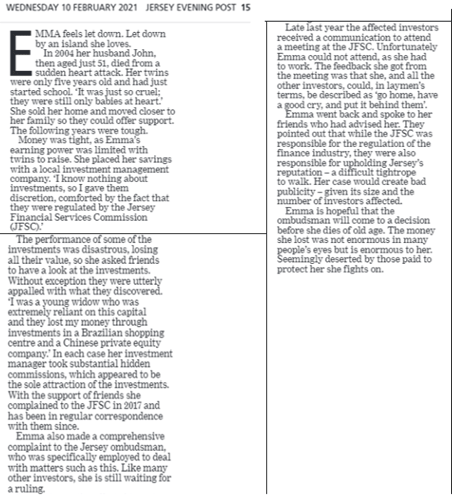