Rishi Sunak's decision to reappoint Suella Braverman six days after she was forced to resign for a security breach is facing new questions about the "multiple breaches of the ministerial code". https://www.theguardian.com/politics/2022/oct/26/suella-braverman-return-after-security-breach-defended-by-james-cleverly

Was she lucky? Would you and your organisation be so fortunate? 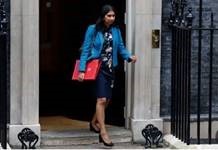 What might the Executive or firm be at risk of?

❓A fitness and propriety re-assessment?

❓A regulatory probe into the firm's data security system and controls?

❓An internal review of usage of work and personal devices?

❓Losing stakeholder and the public trust and confidence?

❓The sack following an act of gross conduct charge?

❓Could this have been avoided by more attention paid to the particular needs of the new executive – induction training?

Cyber-security training and culture is important for everyone