Bonham-Carter has accounts frozen over suspected links to Russian oligarch

Since 2017 Graham Bonham Carter has had a business relationship with the oligarch Deripaska using an array of corporate entities that can complicate the understanding of underlying ownership interests.

Investigations of Deripaska and Bonham Carter

Deripaska and Bonham Carter have been under investigation by law enforcement in the U.S. and U.K.

The FBI searched the Washington house and a New York property linked to Deripaska in October 2021.

The court order was issued on 4th March, preceding the U.K.'s sanctioning of Deripaska on 10th March.

A November 2017 Washington Post article reported that Deripaska had owned one of the most expensive residences in the nation's capital since 2006 and that a second cousin of actress Helena Bonham Carter was managing the property.

The article found that

A Room With a View, Managed by Bonham Carter

Company extracts reviewed by Kharon revealed that high-end real estate in the U.K. and France are linked to Bonham Carter, Deripaska, and Deripaska's cousin Pavel Ezubov, who is involved in the international ownership of assets linked to Deripaska.

Legal entities registered in the U.K., BVI, and France were the owners of these properties, and Bonham Carter was their manager.

Terra Services Limited [TSL], a U.K. limited company is linked to most of these companies, but as a creditor, not as an owner.

Bonham Carter was the general manager of Terra Services Limited in 2018, according to his LinkedIn account.

Belgrave Square in London is widely reported to be owned by Deripaska in media coverage of a brief takeover of the property on 14th March by protesters demonstrating against Russia's invasion of Ukraine, is owned by

According to a 2016 company disclosure,

These arrangements appear to correspond with a 14th March statement by a spokesman for Deripaska that 5 Belgrave Square belongs to members of his family, not to Deripaska himself.

According to 2018 company extracts from the France Registry of Companies and Commerce,

Bonham Carter was listed as a manager for each company on the company extracts, and

Terra Services Limited is a creditor to each.

The Villa Herakles, a private oceanfront villa in Saint-Tropez, is owned by 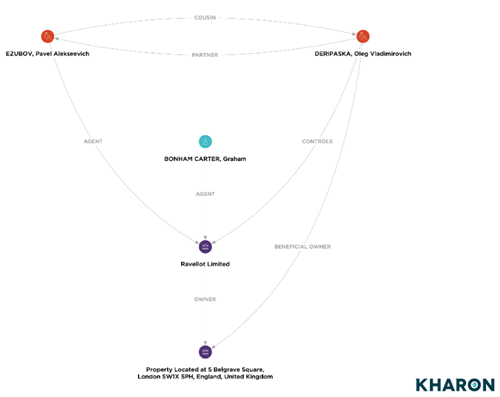 EU FRAUD SANCTIONS
« Back to News