Transnational crimes generate US$1.6 trillion to US$2.2 trillion annually

In 2017, Global Financial Integrity (GFI) did a study on transnational crime and found that the combined annual value of 11 different transnational criminal markets was between US$1.6 trillion to US$2.2 trillion.

Groups including the FARC, the so-called Islamic State, the Lord’s Resistance Army, and political regimes such as Nicolas Maduro’s in Venezuela that operate as a transnational organized criminal network all utilize these lucrative criminal markets to line their pockets, consolidate power, perpetuate violence, and directly harm the safety and security of US government interests. 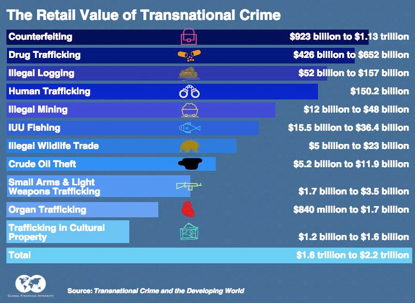