In Jersey, in November 2019, a mum-of-four was jailed for a £70K BENEFIT FRAUD. In August 2022, a 53 old woman was jailed for a £110K FRAUD. And now a mum of three has been jailed in September 2022 for £33K FRAUD. Although there are probably more cases, these three stories are summarised below.

However, I wish to highlight that no Jersey bank, IFA, Lawyer, Accountant or other AML-regulated firm has been held to account for providing services and or products to these ladies even though they were benefiting for 10,7 and 4 years, respectively.

THE BENEFIT FRAUD IS MONEY LAUNDERING 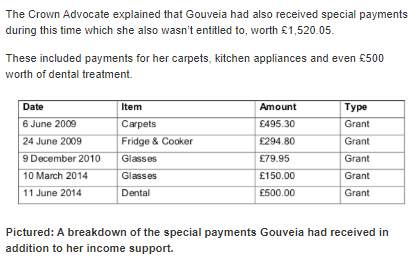 The Magistrate's Court heard that

The social security department must be informed of a claimant's total financial circumstances before they can make payments.

Advocate James Bell, defending, suggested that the four-year period during which Carcel had been falsely claiming was a mitigating factor. He said:

Advocate Bell also pointed out that the risk of Carcel reoffending was low, and she had written a letter of remorse. He argued the impact of imprisonment on her children would be 'disproportionate' and called for her to receive a community service order.

Anyone who suspects someone is fraudulently claiming benefits is able to anonymously report it online by calling 0800 735 1111 or reporting to the FIU https://jersey.police.uk/about-us/departments/financial-crime-(jfcu)/

JERSEY FRAUD
« Back to News