Complex offshore corporate structures or trusts are not immediately dodgy

In an application dated 4 September 2019, to discharge three unexplained wealth orders (“UWOs”) and related interim freezing orders (“IFOs”) (together “the Orders”) made by Supperstone J. on 22 May 2019, under sections 362A to 362R of the Proceeds of Crime Act 2002 (“POCA 2002”) MRS JUSTICE LANG DBE made some interesting observations about offshore corporate structures and suspicion. 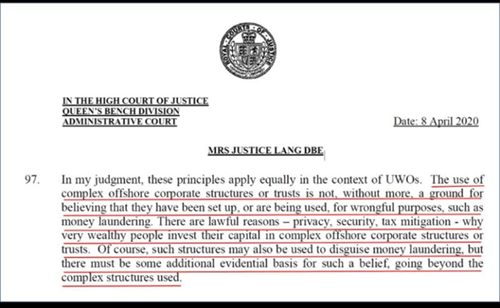 UNITED KINGDOM
« Back to News